From Call the Midwife:

(Underneath railway arch waiting in the snow outside Nonnatus House)

Patsy: Where on earth have you been?

Patsy: Wait here. I need to change out of my uniform….

Delia: I couldn’t write at all to begin with. Not for the first month. But after that, I sent three letters. My mother posted them (Patsy raises eyebrows) or maybe she didn’t.

Delia: She thinks you’re my friend from training school.

Patsy: Oh, yes, the lady she helps at Cubs.

Delia: I promise you, that’s all she thinks. But she doesn’t want me coming back to London to live or to nurse.

Patsy: Why not, if you’re well enough?

Delia: In her mind, I’ll never be well enough…

Delia: I lose my train of thoughts sometimes

Patsy: Better than losing you….

Delia: I’ll be on the bus back to Hornsey soon.

Patsy: I don’t know what I’m supposed to say to that

Delia: Yes… I have to come back to work. Back to London. This is where my life is and where you are.

When David had finished speaking to Saul, the soul of Jonathan was bound to the soul of David, and Jonathan loved him as his own soul. 2 Saul took him that day and would not let him return to his father’s house. 3 Then Jonathan made a covenant with David, because he loved him as his own soul. 4 Jonathan stripped himself of the robe that he was wearing, and gave it to David, and his armour, and even his sword and his bow and his belt.

…. Jonathan made a covenant with the house of David, saying, ‘May the Lord seek out the enemies of David.’ 17 Jonathan made David swear again by his love for him; for he loved him as he loved his own life.

If I am not careful I will read into the tender love story of Patsy and Delia some of the dross of the world in which I move today and not hear the voice of The One Who Loves us Best in amongst their care for each other. So please be patient with the words which follow.

It appears in the United Kingdom it was never, in distinction to men, a criminal offence to be in a lesbian relationship. But even in the more liberal time of the late 1960’s (when Patsy and Delia meet) it was frowned upon. Patsy does not want Delia’s mother to suspect their ‘secret’ but also is irked that she is seen only as, ‘the lady she helps at Cubs’.

What draws me to the story of Delia and Patsy is their tenderness for each other and their determination to give themselves away each to the other. Their love, like that of David and Jonathan in the Old Testament, is a covenant love and the world is a poorer place for not always valuing such love.

They have literally, again like David and Jonathan, been through hell. The tentative first steps of their relationship, followed by the growing confidence and the decision to move into a flat together. Then Delia’s tragic accident leaving her with loss of memory, unable to recognise her lover, and falling back into the arms of a caring yet controlling mother.

‘Don’t break the thread.’ Is her plea. This is her plea for all those who have a covenant love between them. Covenant love takes so many different shapes. Mother and child, husband and wife, sibling to sibling, comrade-in-arms to comrade-in-arms, lover to lover, and of course nun to nun in the sisterhood of the religious life. All of them live out the deep love that is called covenant.

Whenever society, and especially the church, acclaims the rich variety of these loves as forms of marriage my heart sings. If this love has to remain hidden, furtive, and secret my heart is saddened but the love remains undiminished. In the darkness the smallest flame burns the brightest!

If you know of a covenant love like this, or are blessed to be part of such love, hear Delia’s words of wisdom, Don’t break the thread!’ Make every effort to always support lovers and to always be a lover. Whenever we do the whole of the human race always wins.

You are holy, Lord, the only God,
and your deeds are wonderful…
You are Good, all Good,
supreme Good,

Lord God, living and true,
You are love.
You are wisdom.
You are humility.
You are endurance.
You are rest.
You are peace.
You are joy and gladness.
You are justice and moderation.
You are all our riches,
and You suffice for us… 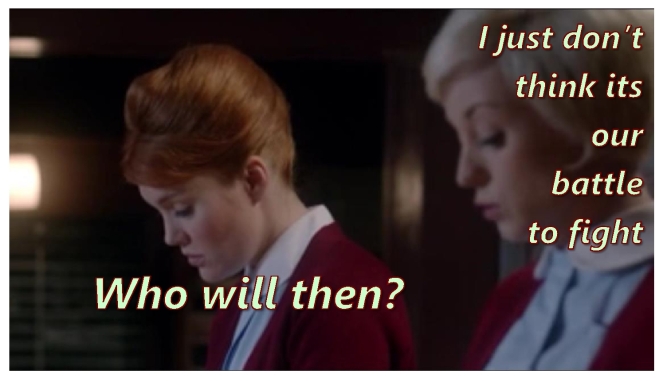 About Call the Midwife: Call the Midwife is a British period drama television series based on the memoirs of former nurse Jennifer Worth (née Lee), who died shortly before the first episode was broadcast. It is set in the late 1950s and early 1960s and for the first three series centred primarily on Jenny Lee herself, who, in the first episode, begins a new job as a midwife at a nursing convent in the deprived Poplar district of East London. The programme’s cast includes nuns who live at the convent and other midwives and nurses who share life with the nuns. At the beginning and end of each episode the voice of “Mature Jenny’ sets the scenes and sums up what has happened. These ‘voiceovers’ make up most of the quotes used in these reflections.

A Synopsis of each episode may be found here:

Quotes from ‘Call the Midwife’ are copyright © 2016 BBC. If you enjoy this programme please consider buying the DVD’s rather than downloading unauthorized copies from the Internet.

Scripture quotes are from the New Revised Standard Version Bible, copyright © 1989 the Division of Christian Education of the National Council of the Churches of Christ in the United States of America

Prayers are from the collection ‘Yours Is the Day, Lord, Yours Is the Night’, copyright © 2012 Jeanie Gushee & David P. Gushee.

2 thoughts on “Will you Fight Someone Else’s Battle?”