‘It’s odd. When Lady Abbess Hester died it seemed as if we were finished,’ said the nuns. ‘Instead we grow richer and richer. Who would have dreamed, two years ago, that we should have Japanese novices here?’

There were only four ‘white veils’ now Yuri, two months after her Clothing, had given up and Mr Konishi had flown her back to japan, ‘where she will soon be betrothed,’ said Mr Konishi. ‘Well, to have a good, well-brought-up family is to serve God another way.’
‘And for four out of five to persist is remarkable,’ Abbess Catherine cheered him.
‘Yes. This Dame Philippa, it seems, is an excellent influence.’

Abbess Catherine agreed. Mrs Talbot, she could have guessed, would not have tolerated anyone slow, but Dame Philippa was patience itself with, for instance, Kazuko,
‘Far more than I,’ Dame Clare admitted. ‘I find Kazuko exasperating.’
‘But they treat me as a guru.’ Philippa had the feeling of being caught in a net.
‘That’s how they look on you,’ said the Abbess.
‘I don’t want to be anybody’s guru. God forbid!’ Philippa could have said. ‘I have had enough of that,’ but a zelatrix has to think of her novices, not herself.
‘Don’t try to detach them yet,’ Abbess Catherine was saying; ‘they are not ready. They will need you for a long time.’

Philippa tried to keep herself subservient in every way to Dame Clare, but it was plain that the Japanese knew who their real Mother Mistress was – ‘and not only the Japanese,’ said shrewd Dame Clare.
Philippa would have been still more alarmed if she had known what the novice mistress said to the Abbess: ‘Mother, it is Dame Philippa who should be over me, not I over her; any-thing else is ridiculous.’
‘She doesn’t try to usurp, I hope.’ Dame Agnes’s suspicions died hard.
‘Indeed not, but it is evident,’ said Dame Clare. ‘Not for anything she does, but because she is.’
‘Is who?’ The little nun bristled.
‘Is Dame Philippa.’

Since, then, we have such a hope, we act with great boldness, 13 not like Moses, who put a veil over his face to keep the people of Israel from gazing at the end of the glory that was being set aside. 14 But their minds were hardened. Indeed, to this very day, when they hear the reading of the old covenant, that same veil is still there, since only in Christ is it set aside. 15 Indeed, to this very day whenever Moses is read, a veil lies over their minds; 16 but when one turns to the Lord, the veil is removed. 17 Now the Lord is the Spirit, and where the Spirit of the Lord is, there is freedom. 18 And all of us, with unveiled faces, seeing the glory of the Lord as though reflected in a mirror, are being transformed into the same image from one degree of glory to another; for this comes from the Lord, the Spirit.

When I first planned these Lent Reflections there was no thought in my mind that during Holy Week I would be making use of quotes from two famous Cinema Sirens. However Greta Garbo’s well-known, and by her disputed, words about being alone and Angelina Jolie’s decision to spend herself for others in her work as a UNHCR special envoy for Refugees seem to be the perfect words with which to bracket the change that is growing within Philippa. 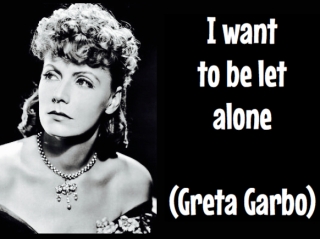 quiet of her cell, to being the reluctant guru of the Japanese novice, to the experienced ‘Mother Mistress’ Dame Clare wanting to play second fiddle to Philippa’s lead. The gifts and skills that helped Mrs Talbot be a high climber in the Civil Service are now helping her to be a humble servant. Such service always shines.

Saying ‘I don’t want to be anybody’s guru. God forbid!’ has perhaps helped her to be the best type of guru, one who journeys along side and with others rather than one who runs ahead issuing orders or stays behind giving instructions.

In some respects all of us are gurus. We may not have hordes of people flocking to our doors hanging on every word we speak but we all have people who look to us for a lead. Like it or not we are an example to those around us and they will judge our Beloved by how they see His likeness reflected in our words and our deeds.

Before I became a vicar I worked in a printing ink factory in Johannesburg. Friday was deadline day with printers wanting to keep their presses running all weekend. This put our laboratory under pressure and it was common practice to, shall we say, tell untruths to customers as to when their ink would be ready. It seemed a necessary approach for if we told them a deadline could not be met they would go to our opposition. I caused a fracas, and a large amount of upset and fruity language amongst the sales team, when I refused to lie anymore. There were complaints to management, others were given my ‘rush’ jobs and had to lie in my place, and I was not at all popular. But after a while the company saw loyalty return from customers who appreciated honesty and (not solely through my witness) several of my colleagues started attending church.

I did not set out to be anybody’s guru or evangelist, all I was doing was trying, and often failing, to be faithful myself. However my unintended example became a beacon for them and former adversaries became firm friends and are now fellow pilgrims. Like Philippa we may not want to be anybody’s guru but just by being out and about in public our example makes us into a guru for everyone we meet.

Whoever in our life looks up to us, watches our example, or challenges our faith already sees us as a kind of guru. We must endeavour to give them reason to change their own life so that they, with us, will be transformed from one degree of glory to another.

Pour your Light,
Holy Spirit of God,
into our hearts and minds.
Help us to know more clearly
and grasp more fully
the Good News of Jesus.
And help us then
to know how to share it.
We ask this
through Jesus Christ
Who with You and the Father
are One God.

1) In the days ahead it may be that you are attending church more frequently and this will disrupt plans made by friends and family. How will you respond to this so that you will be a ‘guru’ for them instead of a nuisance?

2) Who is your ‘guru’? Maybe Easter would be a good time to thank them by following one of the lessons you have learnt from them.