School Dinners & the Privilege of Service

An extract from the annals of the Royal Hospital School Association:

All 700 boys ate meals at the same time with a Red Light being used to maintain silence whilst food was being served and plates cleared away. Each house had three tables with a pair of forms to sit on. Senior Boys (prefects were given the ‘rank’ of Petty Officer) served the food at the top of the table (Up Capo) and it was passed down the table with the youngest boys (New Jacks) seated at the bottom (Bolt of the table) to each boy. Those at the very Bolt End were on Scrapey, cleaning the worst off the plates once the lights had come on to pass plates down. They stacked them and the plate boy collected after putting pudding Up Capo. Head of school or deputy controlled red lights from top table with duty master. Dropping of plates was rewarded with loud cheers!!

progress from being Down Bolt – with its inevitable small portions – and lip-lickingly looked forward to moving along the table to be Up Capo – were it was rumoured that such culinary delights as second helpings were available! We were left desolate when in the middle of the 4th Form year the Headmaster introduced what he termed as the ‘Cafeteria Feeding System’ which meant everyone got the same food and any hope of Rank having privileges was dashed. To say that I felt somewhat chiselled is an understatement!

For that reason today’s gospel reading, with the encouragement to move Down Bolt  to the very bottom of the table has always, always left me with a pang of hunger. I know it shouldn’t, after all as a Franciscan part of our Rule reads;

‘We are ready to accept the lowest place when asked and to volunteer to take it.’  (The Principles – Day 24)

And I do try very hard to be the last in the queue – well we British should always endeavour to play to our strengths! But fighting feelings of hunger and memories of Boarding School food (or the lack thereof) is hard work.

After a lifetime of exploring these feelings I discover two things in my life that need the grace of God to fill them and the light of the Holy Spirit to shine upon them; Greed and Faithlessness.

Of the two, Greed is the one I find easier to deal with, faithlessness presents a greater challenge.

The easy answer is to be guaranteed the best most freshly prepared food. Up Capo we can indulge our inner Epicurean and live the maxim, ‘eat, drink, and be merry, for tomorrow we die’ – or the modern version ‘live fast, die young and have a good looking corpse!’

This sort of greed is in reality a form of pride and even hubris.  You see it is no so much about what we eat but with whom we are eating

In fact sometimes the food you eat when you are ‘nobbing with the hobs’ is not always that great… as I tell everyone who asks about what happens during silver service receptions at Lambeth Palace. Oops!  Did I just let my privilege show there?  You see even telling others that you have been ‘hob-nobbing’ has a delicious, yet ultimately sinful, taste to it…

This is why those who climb the ladder of celebrity and influence often find that their principles weigh them down. The greed for status means the climb Up Capo will demand that our integrity and principles are left Down Bolt

A word from Francis of Assisi speaks to our greed for all sorts of things;

‘Remember that when you leave this earth you can take with you nothing you have received, only what you have given’.

Or, as the old aphorism says, ‘there are no pockets in a shroud’.

The more difficult challenge of the call to ‘take the lowest place’ is not greed or pride but faithlessness.

Faithlessness means we will fight for the top place at the table and enter the realm of salvation by works, to ignore the sacrifice of the cross, and live out that most heartless of statements, ‘Blow you, I’m alright Jack!’

For proof of this please look at the workings of pretty much any nation in the world today, sadly numbering among them our own ‘Green and pleasant land’.

When we believe that God won’t provide us with all that we need.
When we think that we have to forage for the necessaries of life all by ourselves.
When we choose to put our wants and desires above the desperation of others.
It is then that we make a shipwreck of our faith

The North American theologian Carlos Rodriguez when speaking of Justice and Equality, which ultimately is what our Gospel Reading is about, has this to say;

Ultimately I find that I stand on top of others, elbow them out of my way, decide that I am

more important than them, because I am so use to getting what I have always had Up Capo that I am blind to the hunger of those who are Down Bolt.

And so to my sins of greed, pride, and unfaithfulness, I must add avarice – there is a reason why the Seven sins we are warned against in the Letter to the Galatians are called ‘Deadly’. They are deadly not only to us but also to those whom we beggar and trample on in our desperation to be at the top of the heap and in so doing (as did my schoolboy nemesis Up Capo) steal from them the hope which faith brings.

It has often been said that the ground at the foot of the cross is level. There is no one who is more of a sinner, and so further away from salvation, than another. Also there is no one who is closer to the cross, and so more beloved of God than any other. So, as far as the salvation won for us on the Cross is concerned it makes absolutely no difference if we find ourselves Up Capo or Down Bolt.

This is Good News and our task is to spread this same Good News from the bottom upward – God does not believe in the ‘trickle-down’ theory of economics. God’s love is profligate and unconditional – after all God loves each and every one of us no matter how undeserving we feel – and we are entrusted to spread this love. 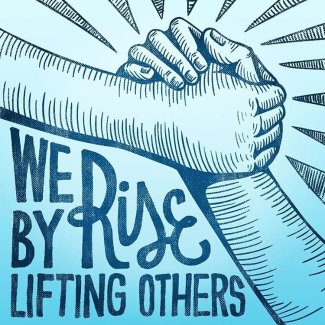 It has often been said that, ‘We Rise by Lifting Others’ a task which is most often accomplished from below those whome we aim to light and not above them. We are called to proclaim the Gospel most often from Down Bolt rather than from Up Capo. This is why Jesus reminds us in Matthew’s Gospel that we will not find him in King’s palaces but in an animal’s feeding trough. We will not meet our King Up Capo with the princes and the prelates but Down Bolt with the hungry and the thirsty, the naked and the stranger, the sick and the imprisoned

So, my sisters and brothers, in the days ahead which person, who sits at the Bolt End of life’s dining table, will we choose to sit alongside and lift up? How will we turn the temptation to greed and faithlessness that our privilege brings into an opportunity for service and humility?

Know this, if we ever want to meet the King we worship we will only find him at the Bolt End of life sitting waiting patiently for we who sing His Name in Songs and Hymns of Praise to worship him in the broken bodies of those He lovingly brings to us.