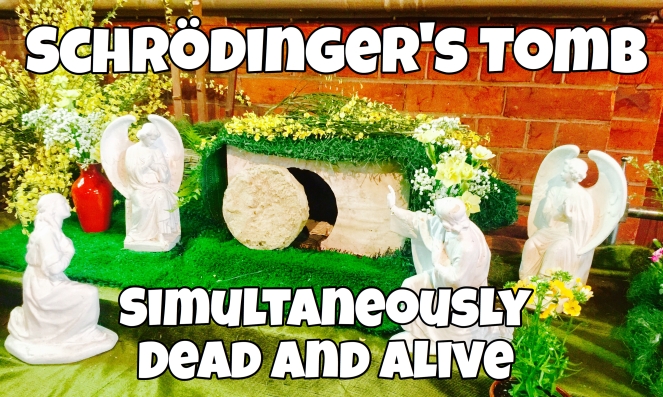 God give you peace my borthers and sisters.

Regardless of whatever the creators of the musical ‘Avenue Q’ think of the purpose of the World Wide Web, everyone really knows,  ‘The Internet is for…. Cats!’ And, as all aficionados of the Sitcom ‘The Big Bang Theory’ – the comfort blanket and home room of all geeks in crisis – there is only one cat ever worth spending any time discussing; Schrödinger’s Cat!

Without going on a long detour into the mind of Erwin Schrödinger and the wonderful world of Quantum mechanics, his theory, which posits how a cat trapped in a box with a lethal poison can be simultaneously ‘dead and alive’ depending on who is observing once the box has been opened, has had many modern ‘either, or’ interpretations.

For example the stand up comic may begin their set with Schrödinger’s Cat walks into a bar…or does she?.

Or ‘What Character from Shakespeare is Schrödinger’s cat’s favourite – Hamlet…. (To be or not to be…)

And then of course there are the contemporary political ones such as ‘Schrödinger’s Immigrant: who simultaneously lounges around on benefits and steals your job’.

And today I would like to suggest the theorem of Schrödinger’s Tomb – which is full and dead when closed yet alive and empty when open. Of course, like Erwin Schrödinger’s original observation, whether you see the tomb as empty and alive, or full and dead will depend very much on the observer.

Jesus himself in the story of Dives and Lazarus warned us that people would not believe ‘even if someone were to return from the dead’ (Luke 19.31) and when his friend Lazarus of Bethany was indeed raised from the dead, those who refused to believe the evidence of their eyes turned to plotting the double murder of Jesus and Lazarus instead! (John 11. 53 & 12.10)

And so the theory that the Garden tomb of Joseph of Arimathea was an early edition of Schrödinger’s eponymous experiment is perhaps not so far-fetched after all. It seems that it is indeed possible for Jesus to be ‘alive and dead’ at the same time depending on where the observer stands and who the observer is.

The paradox of the garden tomb is that when it is full it is dead it is a sign of defeat; it is only when it is empty that it points to new life and the victory of love.

This stretches the boundaries of belief and, if you are of a scientific persuasion, probably the edges of quantum mechanics as well!

The good news is this, only things that were once dead can bring life, only when someone empties themselves completely can the fullness of God’s love be revealed.

This self-emptying of Christ (in theology known as ‘kenosis’) was explained wonderfully in the Epistle Reading for Palm Sunday from Philippians:

‘Let the same mind be in you that was in Christ Jesus, who, though he was in the form of God, did not regard equality with God as something to be exploited, but emptied himself, taking the form of a slave, being born in human likeness. And being found in human form, he humbled himself and became obedient to the point of death – even death on a cross. Therefore God also highly exalted him…’      (Philippians 2.5-9)

This text opens up yet another new theory in the wonderful world of quantum mechanics. Having met ‘Schrödinger’s Tomb’ can we stretch our science a little further and imagine what it would be for us to become ‘Schrödinger’s Christian?’

If we are closed to others we remain full but dead. If however we choose to open ourselves in the service of others, we will find ourselves empty yet truly alive for perhaps the first time.

The journey heavenward is difficult, especially if we have to empty ourselves of all the stuff that we thought gave us life, to find this ‘life after life’. So it is on Easter Day that each of us is given the opportunity to open our hearts and empty our lives (which without God are a kind of death really) and find new life in the Resurrection.

Schrödinger’s Christian is called everyday to renounce their love of ‘the world, the flesh, and the devil’ so that emptying themselves of death they may find life. I do not enjoy doing this. I don’t know about you but I find the sins I commit precious and enjoyable which is why I don’t let go of them too easily. But I have learnt that if I do not go on this journey, if I do not open the tomb that my life has become, I find myself ‘full but dead’. Which is a sad place for a Christian to be on Easter Day.

Christ is risen, and before him ‘every knee shall bend, in heaven and on earth and under the earth, and every tongue will confess that he is Lord,’ because he ‘emptied himself of everything’.

Perhaps today we may finally find the strength to imitate Him, consciously decide to empty ourselves of the sins of ‘the world, the flesh and the devil’ that have filled our lives with death for so long, and enter into the glorious liberty of the children of God?

May you have a very happy, blessed, and empty Easter.