The Road Goes Ever On – it is only as we journey that we begin to arrive.

TEXT: As they came near the village to which they were going, he walked ahead as if he were going on – Luke 24v28

Do you find sequels and ‘prequels’ to successful movies irritating or exciting For me it depends on the genre of the movie, as to whether sequels are a good idea or not. I am left cold by the fact that there have been ten Fast and Furious movies (two more already ‘in the can’!), but I can’t wait for the arrival of the ninth Star Wars episode.  The seemingly endless iterations (seven) of Police Academy did not entertain me at all but I have no problem with four Hunger Games movies, six tales from Middle Earth, nine Harry Potters (plus a West End show) and the small matter of thirteen Star Trek adventures boldly going where no one has gone before!

Whatever your Cinematic tastes, it seems that Hollywood has recognised that life is not so much about the destination but the journey and so is happy to provide a seemingly endless series of latter day pilgrimages.  As John Lennon famously said, ‘Life is what happens to you while you’re busy making other plans.’

For the two disciples on the Road to Emmaus it seemed to them that, in all the plans that they had made to follow Jesus, life had callously passed them by.  Listen to the desolation in their voices as they tell the ‘stranger’ on the road, ‘We had hoped that he was the one to redeem Israel.  Yes, and besides all this, it is now the third day since these things took place. Moreover, some women of our group astounded us.  They were at the tomb early this morning, and when they did not find his body there’.  (Luke 24.21-22)

All that hope for the future now broken on an empty tomb and the hysterical ramblings of some emotional women.

Typical women!  Couldn’t they just let it go? Why do they insist on torturing us with their hallucinations?  Hope is dead and there is nothing left!  All we can do is wander home disconsolate with our tails between our legs and listen to ‘I told you so’ stories from the regulars in the Inns of Emmaus

…and then, as the journey continues, hope begins to reawaken.  The ‘stranger’ starts to sound familiar, he teaches, as other had noticed beforehand, ‘as one having authority, and not as the scribes’ and they are intrigued.

At the end of the road the ‘stranger’ makes as if to travel further and they, seeing that there is hope in the middle of their despair and a glimpse of life in the middle of their ‘living death’, insist that he stops for a while and tell them more.  But not for long.  Once recognised, the ‘stranger’ revealed as the one who is indeed ‘the one to redeem Israel’ and the whole of creation, leaves them to continue the journey of new life.

Our travellers, breaking all the rules about the permitted length of journey for a day, rush back to Jerusalem to tell others that the journey has only just begun!

But what of us?  Are we, like them, eager to carry on this journey heavenward or are we tempted to get to Emmaus and stop?

Sometimes I regret that ‘it was in Antioch that the disciples were first called ‘Christians’ ‘ (Acts 11v26).  It was at Antioch that the disciples, the pilgrims, seemed to have begun to have ’arrived’; now it was no longer necessary to be on a ‘journey’. This, down the centuries, has led to some parts of the Body of Christ being tempted to believe that there is an ‘us’ and a ‘them’ in the Realm of God.  Some, called Christians, are safe and at home, whilst others are ‘sinners’ and (bemusingly so) find themselves outside the love of the God who loves everyone.

Any of us who have begun to seriously attempt the journey of faith will know that the closer we think we are to home the more of the journey there is left to complete! We dare not stop travelling the road to Emmaus for fear that we think we may have ‘arrived’.

For too many people their Confirmation by the Bishop or baptism by their pastor has become a ‘church leaving certificate’ instead of an invitation to travel the Emmaus road.   Even for those who do persevere with the life of faith how many of us have stopped learning about the faith?  I am sorry to say but no matter how good and inspiring the preacher is, none of us will grow to become mature Christians if the only lessons we learn about our faith are five to ten minutes worth from the pulpit.

Like the disciples at Emmaus, we cannot forever stay at the table staring at broken bread but must begin the journey again, proclaiming the Good News and learning the faith as we go.  Learning is not for Lent only; keep your eyes open for other seasons of study in the church year and regular midweek fellowship groups.  Prayer is not for Sundays only; the old aphorism is true, ‘seven days without prayer makes one weak’.  The Bible cannot be condensed to a weekly dose of two paragraphs from the Lectionary; to grow in the knowledge of God we will need to steep ourselves in the message of God’s Word.

The Road to Emmaus must go ‘ever on and on’ until we arrive at our heavenly home.

Frodo, in The Fellowship of the Ring, reminds the weary travellers of one of Old Bilbo’s walking poems: 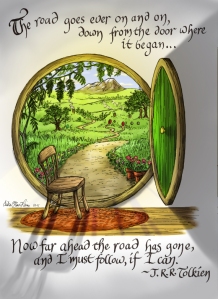 “The Road goes ever on and on
Down from the door where it began.
Now far ahead the Road has gone,
And I must follow, if I can,
Pursuing it with eager feet,
Until it joins some larger way
Where many paths and errands meet.
And whither then? I cannot say”

I know that one of the reasons why I don’t always travel this road to Emmaus that goes ‘ever on and on’ is that I don’t know exactly where it leads.  But this I have learned – even though this road has led me into some interesting, some difficult, some lonely, and even some dangerous places – that I must follow if I can.

Nowhere else will I meet the One who fulfils my hopes and comes to redeem the whole world.  From no one else will I learn of the deep love God has for all creation. With no one else does every breaking of bread become communion.  And no one else can warm my heart, open my eyes, and encourage me to tell others of God’s Good News.

I am not renowned for over-much physical exercise but this is one journey I will not be missing.  Why not come and join me?