To Read: Click on song title to watch a video

Whenever I see someone less fortunate than I
(And let’s face it – who isn’t less fortunate than I?)
My tender heart tends to start to bleed
And when someone needs a makeover I simply have to take over
I know, I know exactly what they need
And even in your case, tho’ it’s the toughest case I’ve yet to face
Don’t worry – I’m determined to succeed
Follow my lead and yes, indeed

You will be: Popular!
You’re gonna be popular! I’ll teach you the proper ploys
When you talk to boys, little ways to flirt and flounce
I’ll show you what shoes to wear, how to fix your hair.
Everything that really counts to be popular
I’ll help you be popular!
You’ll hang with the right cohorts, you’ll be good at sports
Know the slang you’ve got to know
So let’s start. ‘Cause you’ve got an awfully long way to go:

Don’t be offended by my frank analysis, think of it as personality dialysis
Now that I’ve chosen to be come a pal, a sister and adviser
There’s nobody wiser
Not when it comes to popular – I know about popular
And with an assist from me to be who you’ll bee
Instead of dreary who-you-were: are:
There’s nothing that can stop you
From becoming popu-ler: lar: La la la la
We’re gonna make you popular

When I see depressing creatures with unprepossessing features
I remind them on their own behalf
To think of celebrated heads of state or specially great communicators
Did they have brains or knowledge? Don’t make me laugh!
They were popular! Please –

It’s all about popular! It’s not about aptitude, it’s the way you’re viewed. So it’s very shrewd to be very very popular like me!

And though you protest your disinterest
I know clandestinely, you’re gonna grin and bear it
Your new found popularity, La la la la
You’ll be popular – Just not as quite as popular as me!

Someone in the crowd said to him, ‘Teacher, tell my brother to divide the family inheritance with me.’ 14 But he said to him, ‘Friend, who set me to be a judge or arbitrator over you?’ 15 And he said to them, ‘Take care! Be on your guard against all kinds of greed; for one’s life does not consist in the abundance of possessions.’ 16 Then he told them a parable: ‘The land of a rich man produced abundantly. 17 And he thought to himself, “What should I do, for I have no place to store my crops?” 18 Then he said, “I will do this: I will pull down my barns and build larger ones, and there I will store all my grain and my goods. 19 And I will say to my soul, Soul, you have ample goods laid up for many years; relax, eat, drink, be merry.” 20 But God said to him, “You fool! This very night your life is being demanded of you. And the things you have prepared, whose will they be?” 21 So it is with those who store up treasures for themselves but are not rich towards God.’

The reflections this week are about some of the classic ‘deadly sins’ of the faith. How we can fall into them and ways to avoid them.

In London’s West End the Underground stations have changed the name of the show from which today’s reflection is taken. As you travel up and down on the escalators there are alternating pictures of the two witches Glinda and Elphaba with the same single word on both, ‘Wicked?’ 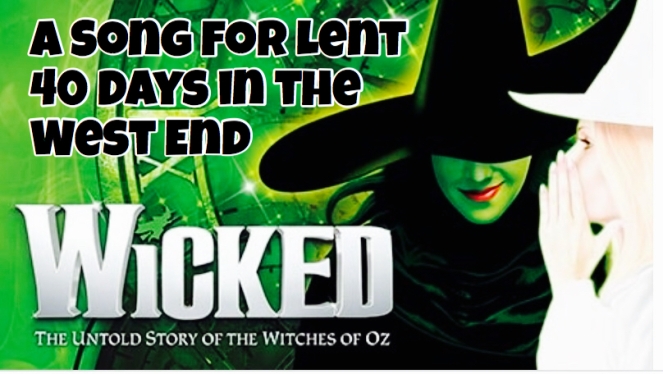 Those who have seen ‘Wicked’ will know that the addition of a ‘?’ to the end of the word is a clever twist not only on the title of the play but also its plot. Is the story about Glinda the Good and Elphaba the Wicked or are their roles reversed?

Glinda is not so much ‘Glinda the Good’ as ‘Glinda the Greedy’ and I get the impression if she were to be on reality TV she would fit in perfectly on ‘The Only Way is Essex’, ‘Made in Chelsea’ or even ‘Love Island’. She is a ‘good’ friend to Elphaba but only so long as this helps her get her own way. The song ‘Popular’ is not at about helping Elphaba find acceptance but about Glinda…

You’ll be popular – Just not as quite as popular as me!

Poor Glinda, she means well – words that damn with faint praise – but finds that her own greed for success in love, and her desire for the limelight gets in the way!

In the life of faith rampant greed is easily called out, sadly it is far too often the meat and drink of the press, but stopping greed at its root is difficult. It seductively calls us into a bubble of believing that we are just a little more deserving than our sister or brother standing next to us. Greed whispers in my ear, ‘you deserve it’, even if it means someone else goes without, and so it becomes the meat and drink of Advertising Agencies.

Glinda doesn’t want to be greedy, she doesn’t want Elphaba to get into trouble (unless it means she can steal her lover!), and she is genuinely upset when Elphaba has to flee Oz. However her desire to always be at the front of the queue is her downfall and she succumbs to greed and so justifies adding a ‘?’ to the word ‘Wicked’.

Humility has always been the church’s answer to greed. This does not being a doormat but endeavouring to see all around us as family whom we love by putting them first. The Rule of the Third Order puts it this way;

We always keep before us the example of Christ, who emptied himself, taking the form of a servant, and who, on the last night of his life, humbly washed his disciples’ feet. We likewise seek to serve one another with humility…

We take care to cast out the beam from our own eye before offering to remove the speck from another’s. We are ready to accept the lowest place when asked, and to volunteer to take it.[1]

The antidote to greed is to cease from trying to make ourselves bigger and better but instead to revel in the glory of God revealed in those around us and learn to say ‘thank you’ more often.

Father God, just as children spoil their presents,
so we abuse your good gifts to us.
We dump rubbish in the rivers.
We leave litter on the streets.
Our beaches are contaminated with oil.
The air is ﬁlled with fumes and smells.
Noisy machines and radios destroy our peace.
And so many of these things we allow in the name of progress.
Give us a greater respect for the world you entrust to us,
so that by our greed and selﬁshness,
we do not destroy or spoil,
that which we could never have created for ourselves.

Encore: Click on song title to watch a video

It would be wrong to mention ‘Wicked’ without listening to Defying Gravity. This version is from ‘Glee’. In one of their regular ‘Diva Offs’ Kurt deliberately throws the final notes of the song so that Rachel wins the contest. A model of how to step back from the limelight and win at caring for your friends. One day I will write a blog called ‘The Gospel According to Glee’.

Prayers are from ‘Prayers Encircling the World’ and are copyright © SPCK: 1998.
Scripture quotations are copyright © New Revised Standard Version Bible: Anglicized Edition, copyright 1989, 1995, Division of Christian Education of the National Council of the Churches of Christ in the United States of America. Used by permission. All rights reserved.
These Reflections, ‘A Song for Lent – 40 Days in the West End’ are copyright © Andrew Dotchin 2018

[1] For a complete copy of the Principles (part of the Rule) visit: http://tssf.org.uk/about/principles/