Setting the Scene:   Once on the other side of the Stable Door in the Last Battle, Lucy (as always) leads the way on the journey to Aslan’s country as they all travel ‘further in and higher up’. Their journey is stopped when they encounter the dwarfs who just will not be taken in.

Lucy led the way and soon they could all see the Dwarfs. They had a very odd look. They weren’t strolling about or enjoying themselves (although the cords with which they had been tied seemed to have vanished) nor were they lying down and having a rest. They were sitting very close together in a little circle facing one another. They never looked round or took any notice of the humans till Lucy and Tirian were almost near enough to touch them. Then the Dwarfs all cocked their heads as if they couldn’t see anyone but were listening hard and trying to guess by the sound what was happening.

‘Look out!’ said one of them in a surly voice. ‘Mind where you’re going. Don’t walk into our faces!’

‘All right!’ said Eustace indignantly. ‘We’re not blind. We’ve got eyes in our heads.’

‘They must be darn good ones if you can see in here,’ said the same Dwarf whose name was Diggle.

‘In where?’ asked Edmund.

‘Why you bone-head, in here of course,’ said Diggle. ‘In this pitch-black, poky, smelly little hole of a stable.’

‘Are you blind?’ said Tirian.

‘Ain’t we all blind in the dark!’ said Diggle.

‘How in the name of all Humbug can I see what ain’t there? And how can I see you any more than you can see me in this pitch darkness?’

‘Anyone that knows the smell of baccy could tell that,’ said Diggle.

‘Oh the poor things! This is dreadful,’ said Lucy. Then she had an idea. She stopped and picked some wild violets. ‘Listen, Dwarf,’ she said. ‘Even if your eyes are wrong, perhaps your nose is all right: can you smell that?’ She leaned across and held the fresh, damp flowers to Diggle’s ugly nose. But she had to jump back quickly in order to avoid a blow from his hard little fist.

‘None of that!’ he shouted. ‘How dare you! What do you mean by shoving a lot of filthy stable-litter in my face? There was a thistle in it too. It’s like your sauce! And who are you anyway?’

‘Earth-man,’ said Tirian, ‘she is the Queen Lucy, sent hither by Aslan out of the deep past. And it is for her sake alone that I, Tirian your lawful King, do not cut all your heads from your shoulders, proved and twice-proved traitors that you are.’

‘Well if that doesn’t beat everything!’ exclaimed Diggle. ‘How can you go on talking all that rot? Your wonderful Lion didn’t come and help you, did he? Thought not. And now – even now – when you’ve been beaten and shoved into this black hole, just the same as the rest of us, you’re still at your old game. Starting a new lie! Trying to make us believe we’re none of us shut up, and it ain’t dark, and heaven knows what.’

‘There is no black hole, save in your own fancy, fool,’ cried Tirian. ‘Come out of it.’ And, leaning forward, he caught Diggle by the belt and the hood and swung him right out of the circle of Dwarfs. But the moment Tirian put him down, Diggle darted back to his place among the others, rubbing his nose and howling:

‘Ow! Ow! What d’you do that for! Banging my face against the wall. You’ve nearly broken my nose.’

There is for me a confusing passage in the Gospels that describes why Jesus tells parables;

‘To you it has been given to know the secrets of the kingdom of heaven, but to them it has not been given. 12For to those who have, more will be given, and they will have an abundance; but from those who have nothing, even what they have will be taken away. 13The reason I speak to them in parables is that ‘seeing they do not perceive, and hearing they do not listen, nor do they understand.’ 14With them indeed is fulfilled the prophecy of Isaiah that says: ‘You will indeed listen, but never understand, and you will indeed look, but never perceive. 15For this people’s heart has grown dull, and their ears are hard of hearing, and they have shut their eyes; so that they might not look with their eyes, and listen with their ears, and understand with their heart and turn— and I would heal them.’ 16But blessed are your eyes, for they see, and your ears, for they hear.

This sounds harsh – why doesn’t Jesus give these ‘blind guides’ another chance? Why does he not speak the truth plainly? Then looking more closely I see the passage reminds us that Jesus ‘would heal them’. The people he is speaking about seem incapable of being healed and unable to receive God’s grace. This is more than the sickness of the betrayed who have lost their trust and so proclaim ‘The dwarfs are for the dwarfs’. This is something altogether more serious.

Here, beyond the stable door we see people who refuse to see the truth and embrace the love of God and for them the midday sky is always dark and fresh picked violets smell of stable litter. I am very sad to say that I know people of this sort; people who turn on the bearers of good news, just as the dwarfs would turn on Lucy. People who not only want their own way but absolutely refuse to see any other way of life. What is a greater pity is that I have seen this way of living a half-life amongst people who count themselves to be followers of Christ’s religion.

Insult and darkness seems to be their only recourse and for them the saying ‘misery loves company’ appears to be a rallying cry. All they seem capable of doing is to reject and turn away from anything that might bring wholeness and healing to their lives. They even turn away from God (Aslan’s) direct intervention – which you can read in the rest of this story at the foot of the page.

Does not this heart cry become our own?

I do not know what can be done immediately. We can weep, we can love and give more, we can pray – though all of these are likely to be rejected. In my experience it seems that only personal disaster and calamity, moments when people have completely run out of their own resources, turns this kind of darkness into light. Perhaps this is because the darkness with which they live is not from outside but from a decision, for some sad reason, to ‘always look on the dark side of life?’

My prayer is that such calamity will not be necessary, or if it comes the price will not be too high or that if it comes it does not come too late for the people involved to learn wonderfully that Jesus ‘would heal them’.

in ‘The Book of a Thousand Prayers’ © Angela Ashwin – Compiler

Many of those who are furthest from God and God’s love are close to our own hearts. Weep and pray today for friends and family members who have chosen darkness and disregard of God’s grace over light and wholeness.

Jesus reminds us that some kinds of evil are not driven out by normal means. Hand people who are sitting in darkness and wilfulness over to God’s gentle care and decide to keep your purpose fixed more firmly on your own call. After all it is sad enough that some people have chosen darkness and despair without others living with them. Leave them to God and journey ‘further in and higher up’.

….The Rest of the Story:

‘Aslan,’ said Lucy through her tears, ‘could you – will you – do something for these poor Dwarfs?’

‘Dearest,’ said Aslan, ‘I will show you both what I can, and what I cannot, do.’ He came close to the Dwarfs and gave a low growl: low, but it set all the air shaking. But the Dwarfs said to one another, ‘Hear that? That’s the gang at the other end of the stable. Trying to frighten us. They do it with a machine of some kind. Don’t take any notice. They won’t take us in again!’ 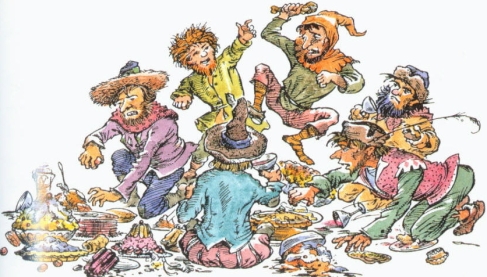 Aslan raised his head and shook his mane. Instantly a glorious feast appeared on the Dwarfs’ knees: pies and tongues and pigeons and trifles and ices, and each Dwarf had a goblet of good wine in his right hand. But it wasn’t much use. They began eating and drinking greedily enough, but it was clear that they couldn’t taste it properly. They thought they were eating and drinking only the sort of things you might find in a stable. One said he was trying to eat hay and another said he had a bit of an old turnip and a third said he’d found a raw cabbage leaf. And they raised golden goblets of rich red wine to their lips and said ‘Ugh! Fancy drinking dirty water out of a trough that a donkey’s been at! Never thought we’d come to this.’ But very soon every Dwarf began suspecting that every other Dwarf had found something nicer than he had, and they started grabbing and snatching, and went on to quarrelling, till in a few minutes there was a free fight and all the good food was smeared on their faces and clothes or trodden under foot. But when at last they sat down to nurse their black eyes and their bleeding noses, they all said:

‘Well, at any rate there’s no Humbug here. We haven’t let anyone take us in. The Dwarfs are for the Dwarfs.’

‘You see, ‘ said Aslan. ‘They will not let us help them. They have chosen cunning instead of belief. Their prison is only in their own minds, yet they are in that prison; and so afraid of being taken in that they cannot be taken out. But come, children. I have other work to do.’