The Abbess, the Abbess and Maisie Shaw

[The community keeps watch as Abbess Hester breathes her last]

‘You want to tell us something, Mother?’ but the Abbess could only say ‘tell’. ‘Why?’ asked the nuns. ‘What could she have to tell? Why should she be so troubled? She cannot be afraid. No true nun is afraid of death.’

‘I wish I knew when I was going to die,’ ninety-six-year-old Dame France Anne often said, ‘I wish I knew.’
‘Why, Dame?’
‘Then I should know what to read next.’

In the early hours of the morning, those hours of low ebb when so many souls slip quietly away as if an resistance were gone, the ‘want’ gave way to ‘sorry’.
‘Sorry.’ The prioress knew the Abbess’s every shade and tone – she would have believed she knew her every thought – and her quick ear had fathomed that this ‘sorry’ was not only regret; then was contrition, deep contrition. ‘Then it is not only Sister Julian; [who had asked to join another community] it is something Mother has done, for which she cannot forgive herself…’
It was Dame Catherine who stood up. She was always strong and, though now she was as white and worn as any of them, resolution shone in her hazel eyes, such resolution that Dame Joan made way for her Dame Catherine stilled the Abbess’s fingers by taking the shaking hands in her own firm grasp; her voice was strong as she spoke. ‘No matter what it is,’ she said. ‘You have said sorry. We have all heard. No matter what it is, we shall deal with it. Dear Mother, there is no more you can do now. Lay it down.’ She knelt and kissed the Abbess’s hand and went back to her place with such swiftness that when the Abbess’s black eyes opened it was only the prioress, Dame Emily, she saw. She looked at her, a look of gratitude, affection and respect; then the Abbess gave a sigh, closed her eyes, and head and fingers were still.

…if anyone has caused pain, he has caused it not to me, but to some extent – not to exaggerate it – to all of you. 6 This punishment by the majority is enough for such a person; 7 so now instead you should forgive and console him, so that he may not be overwhelmed by excessive sorrow.  8 So I urge you to reaffirm your love for him.  9 I wrote for this reason: to test you and to know whether you are obedient in everything. 10 Anyone whom you forgive, I also forgive. What I have forgiven, if I have forgiven anything, has been for your sake in the presence of Christ. 11 And we do this so that we may not be outwitted by Satan; for we are not ignorant of his designs.

‘A coward dies a thousand deaths’ is the modern version of a longer quote from Shakespeare’s play Julius Caesar, which comes when Caesar decides to ignore the auguries and refuses to ‘beware, the Ides of March.’ The rest, as they say is history.

So it is with any sin that we hold on to. At the same time, it brings us to the point of death 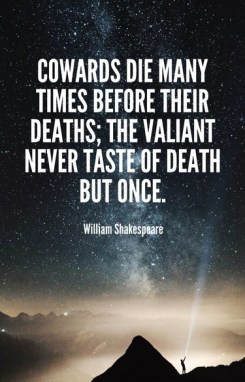 and our embarrassment, pride, unwillingness, refuses to let go of it so we cannot ‘die to self’ and enter in to the joy of our Beloved nor be restored as a member of the Body of Christ. Un-repented sin leads to the death of cowards.

Abbess Hester’s sin, compared to others may not appear great. Those in the world of business would see it as simply a miscalculation. One of those times when the small print – interest rates may go down as well as up – kicks in. But it was a sin against the Community and that is why it hurt her so much that she could not tell them and things were left to her successor, Abbess Catherine, to sort things out. But to hear that story you will need to read the whole book and not simply my daily snippets…

I have learnt from Brede Abbey that there are three rules for living in community. These rules are just as applicable to those who meet only for worship and fellowship but don’t live together. However for those of us living outside the enclosure they are more urgent as we can avoid each other, fudge truths, make excuses, and generally do things ‘My Way’, things with which the closeness of convent life cannot cope.

The First Rule of living in Community

We will get things wrong. We will offend one another – often unintentionally, yet all too frequently purposely. We will take account of our own needs before those of others, after all that is how we learnt to become ourselves. (Richard Rohr’s book ‘Falling Upward’ is perfect reading in this area). I have lost count of the number of times I heard the beloved Desmond Tutu remind us that sainthood only occurs after death. Until then we must realise that we, and our sisters will get things wrong and learn to care for each other as wounded fellow pilgrims rather than expect each other to be paragons of virtue. The one who is self-righteous today will find themselves falling tomorrow.

The Second Rule of living in Community

Learn to say sorry quickly and frequently. Remember how we met the ‘Chapter of Faults’ earlier in Lent? Community living is very very close knit. It does not take a wise Abbess much to pick three nuns to make public ‘accusations’ as to how they have broken The Rule or sinned against another member of the community. The nuns know all too well the Scripture, ‘all have sinned and fall short of the glory of God’ (Romans 3v23) but they are also very familiar with its counterpoint ‘and are now justified by his grace as a gift’ (Romans 3v24). Those living in community know that one of the keys to being ’justified by grace’ and living a free full life in the Beloved’s light is to ‘fess up frequently.

The Third Rule of living in Community

Forgive readily even when, as happened in Abbess Hester’s case, we may not know what went wrong. There are two reasons why this is essential. When we do not forgive we make the sin of another a burden for ourselves to carry and we fall in to the trap of having an unforgiving spirit.

We must aim for our forgiveness to not be predicated on penitence.
We need to learn to forgive even if sorrow has not been expressed, just as our Beloved did for us on the Cross.

This does not mean that we excuse poor behaviour but instead we recognise that what we are often only able to see a ‘sin’ in the life of another because we have recognised it from our own experience (Matthew 7v3). What do we do then, about un-repented sin then? We forgive and we pray, for it is only the Holy Spirit who can convict anyone about sin (John 16v8). Our task is to build a community so overflowing with love and forgiveness that people will choose penitence over pride and sorrow over sin.