When the days drew near for him to be taken up, he set his face to go to Jerusalem. 52And he sent messengers ahead of him. On their way they entered a village of the Samaritans to make ready for him; 53but they did not receive him, because his face was set towards Jerusalem. 54When his disciples James and John saw it, they said, ‘Lord, do you want us to command fire to come down from heaven and consume them?’ 55But he turned and rebuked them. 56Then they went on to another village.

In the movie Lethal Weapon 3 Mel Gibson and Rene Russo play two special agents who, almost, strip down to the altogether in a weird competition where they show off to each other the various grazes, scars and bullet wounds they have received in the pursuit of Justice and the Bad Guys.

In Christian terms it’s a little like Paul’s litany of persecutions, in the Second Letter to the Corinthians, that some people thought was needed to prove he was a faithful disciple;

Most clergy who lived through the Apartheid years in South Africa, can add their own list to this litany. Mine reads thus;

‘Four times arrested, tear-gassed after church, interviewed by the Security Police, bitten, threatened twice with a loaded weapon, punched, kicked, sworn at and labelled a communist and heretic’

But the worst for me (so far) was not found in the heat of the protest to end apartheid, nor in the forging of a new community after the first democratic elections.

The worst was a few years ago when, on leaving the Co-op in Fircroft Road in Ipswich, a middle-aged woman, who I did not know and have not seen since, came up to me and, without saying a word, spat on me, and then turned and walked away.

To be honest I was too shocked to respond. Which was good because inside I felt a little bit like the disciples James and John and would have called down lighting upon her and all those standing at the nearby Number 9 bus stop!

In today’s gospel, Luke, who is at pains to record times when Jesus goes the extra mile for the outcast and outsider, tells of a time when this doesn’t quite work out.

Imagine how the firebrand James and John felt when Jesus, the Messiah himself, deigns to visit the filthy heretical Samaritans and they say ‘thanks but no thanks’? I’m pretty sure they must be distant relatives of ‘Disgusted of Tunbridge Wells’.

I hear the disciples muttering amongst each other.

‘No wonder we don’t let them in to the Temple to worship, bunch of ingrates!’

‘Well what do you expect if you only base your faith on the first five books of the Bible? Samaritans have got no prophets, no history of how God prefers the Israelites, no prophets, no psalms, no soul to their faith.’

‘To be honest, lighting bolts are probably too good for them. Now if only we could call down a proper plague on them like Moses did to the Egyptians…’

And Jesus, what does Jesus do? Jesus instead of having a go at the Samaritans (which is what any sensible Jewish person would do) tears a strip off of the disciples!

Pardon? Surely it’s the Samaritans that are in the wrong not the Boanerges Brothers full of zeal and passion?

But Jesus is correct. He knows that for the Samaritans a Jewish person destined for Mount Zion (instead of their sacred Mount Gerizim) it is difficult for them to hear his words.

After all for thousands of years the Jews had told them they were wrong and now this flavour-of-the-month teacher comes along and wants dispense favours like jelly beans and then hightail it back to Jerusalem?

The Samaritans of Jesus day, and down to today, are fed up to the hind teeth of do-gooders and being ‘done unto’ as if they had no status or purpose of their own outside of a very bad relationship with the Jews.

I have no idea why the woman spat on me, but she was angry.

I have no idea what it was that fuelled her anger, but the church (or her local representative) was the best place she could leave gobbets of it.

After I had got over my shock and my confusion and my own anger, I came to realise that though I personally hadn’t earnt the job of ‘wearing’ her anger, it may have been simply that no one else was available.

Perhaps that is the job of Christians? To wear and hold and heal the anger of a world that is fed-up with being preached at instead of valued, and condemned instead of being seen as part of the same Family of God to which everyone belongs?

At the top of my reading list at the moment is the wonderfully tattooed American Lutheran Priest Nadia Bolz-Weber. She is a little bit off the wall – after all her twitter handle is @SarcasticLuther – but she reaches straight to your heart with her words and her reflections on her experiences. Do read her most recent book Shameless.

Towards the end she says this about the Gospel we try to follow:

I hate that this is God’s economy.

That the salvation of my enemy is tied up in my own.

Which is why I sometimes say that the Gospel is like, the ‘worst’ Good News I’ve ever heard in my life

…the Gospel is like, the ‘worst’ Good News I’ve ever heard in my life

Jesus knew this when he was rejected by the Samaritans

Jesus knew this when he we deserted by his disciples

Jesus knew this when he accepted the anger of a nation break his body on the cross.

…and I get upset about someone spitting on me. 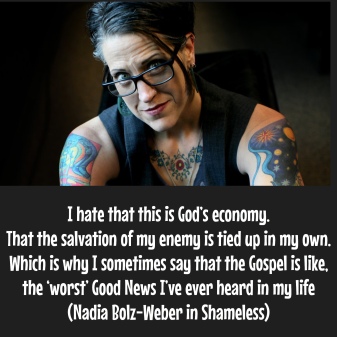 Or we get upset that someone forget their turn on a rota, or read the wrong lesson in the service, or didn’t make it to Chapter/PCC/Deanery Synod/Mothers’ Union meting…

Yes, beloved, this is indeed ‘the worst Good News we will ever hear in our lives. But this is how it must be for of it is not Good News for our enemies – be they inside and outside the church, spitting at us or simply tut-tutting about us – it will never be Good News for us.

After all, we too, as Romans reminds us, were once enemies of God

For if while we were enemies, we were reconciled to God through the death of his Son, much more surely, having been reconciled, will we be saved by his life. 11 But more than that, we even boast in God through our Lord Jesus Christ, through whom we have now received reconciliation.

All this is from God, who reconciled us to himself through Christ, and has given us the ministry of reconciliation;

We have no choice if we are to be followers of this worst of Good News but to go and turn enemies into friends and family members. Because we so often fail at this the Church includes a time of confession in almost all of its worship…

When the world spits on us we do not call down lightening we wipe it away and hand over our tissues so that it may clean the spittle form its own face.

When we stretch out our hand to help and the world bites the hand that feeds it, we offer our other hand in its place.

There is no other way to live this Good News for this is God’s economy, ‘the salvation of my enemy is tied up in my own’.

Amy Carmichael (a Nadia Bolz-Weber of the 19th Century) left her home in Belfast to be a missionary in India.

She wrote this about those Christians who chose anger over healing, hate over love, fame over service, and self over the care of others.

No wound? No scar?
Yet, as the Master shall the servant be,
And piercèd are the feet that follow Me.
But thine are whole; can he have followed far
Who hast no wound or scar?

Come beloved, let us go out into the week ahead and with our Saviour let us wear the world’s pain and anger, hurt and hatred and with our own wounded hands and feet heal, restore and bring everyone into the wonderful economy of God’s ‘worst’ Good News ever.