Text: John 1.29-42
[Jesus] said to them, ‘Come and see.’ They came and saw where he was staying, and they remained with him that day. It was about four o’clock in the afternoon.40One of the two who heard John speak and followed him was Andrew, Simon Peter’s brother. (John 1v39-40)

God give you peace, my sisters and brothers

If you are a child of the vicarage, and if you were born whilst your vicar parent was studying the craft of vicarring, the chances are that you will have been given a Christian name straight out of the Bible.  And what’s more, if your vicar parent was trying to learn Greek and Hebrew when you were born you will learn early on that you and your siblings are not named simply, Timothy, Johnathan, and Daniel but instead Timotheos (Τιμοθεος),  Yehunatan (יְהוֹנָתָ) and Daniyyel (דָּנִיֵּאל

This can be a lifelong burden, especially if your vicar parent insists on spelling Johnathan with an additional ‘h’ so as to be a more accurate transliteration of the original Hebrew!  I’m so so sorry sons…ish :

With this attention to detail concerning names people might suspect that I myself am named for the apostle Andrew.  Sadly no, my father was a devout member of the ‘Church of the Wheelbarrow’ – he only went when he was pushed – my name has no religious connotations at all.  I am named ‘Andrew’ simply because at the time of my birth my dad was absent overseas serving onboard the submarine HMS Andrew.

On my more fey days (which happen more frequently than I would like them) I wish that I was indeed named after the apostle instead of the last Royal Naval Submarine to have a gun fitted on her casing.

After all wouldn’t it make a nice yarn that a young boy from the Fens was named Andrew so that he would grow up to be, like his namesake Apostle, someone who spent his life bringing other people – his brother, a small boy with an even smaller lunch, and even some gentiles – to Jesus with the words ‘Come and See’?

And, on particularly fey days, I relish in the fact (according to John’s Gospel at least) that it was not Peter who was the first of the disciples but Andrew.  Alas, and whisper it quietly amongst the Scottish folk, this is not the case.

Looking again at today’s Gospel reading we see that it was not Andrew alone who, following the Baptist’s direction, went to sit at the feet of Jesus after his baptism.  He was but ‘One of the two who heard John speak’. What of the other follower of John turned disciple of Jesus?

Of this, the first of the disciples, the one who stayed with Jesus whilst Andrew went hunting for his brother, we hear no more. We know not their name, their profession, nor even their gender.  Like the plain wrapped staple foods in supermarkets, the first disciple of Jesus was a ‘No Name  Brand’ disciple.

And so it has been throughout the history of the faith.

Yes, we know some of the names of the faithful, Andrew and Peter, James and John (as well as Timothy, Johnathan and Daniel) but there are so many of the faithful who are un-named and unknown who yet remained faithful and proclaimed the good news of God’s love and faithfulness.

Not having your name known may mean you have no fame in this life.  But then do we want to have our sixty seconds of fame in a fickle world or would we rather be received into Paradise with the words ‘Well done. good and faithful servant’?

It is not easy to work without recognition or reward but the unnamed disciple of Jesus in John Chapter one did; and most of us (I know I hadn’t realised) didn’t even know that they even existed until a few moments ago.

Did the No Name disciple say anything profound?
If they did it wasn’t recorded.

Did the No Name disciple give away their possessions to feed the poor? They may well have as the early church shared everything in common but Jesus tells no parable about their generosity.

Was the No Name disciple ever held up as an example of faithfulness amongst the others?
Who knows?

They may well have gone the extra mile in encouraging the sick to come to Jesus to be healed. 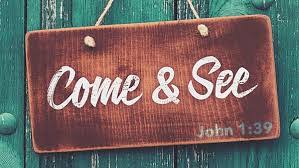 proclaiming the Gospel with the same words that called them to be with Jesus, ‘Come and See.’
We do not know.

All we know is this, some, many, people followed Jesus without fuss, without fanfare, without being at the centre of a dispute or power struggle, with no need to be always at the front, content to be an unknown follower in the name of all those who follow the way of the Lord without any name of their own.

In the end none of us are ‘No Name’ disciples, for we are all made in the image and likeness of God.  And as surely as sparrows do not fall to the ground without being noticed by the One who holds everything in life, God looks on you and I with a deep deep love and gently asks us to tell others of that same love.

We are given the privilege of taking our ordinary ‘No Name Brand’ of faith from the pews of our churches into the shops and workplaces of our towns and villages.

I know you do this already, I have seen you ate work.  You do not use the attention seeking antics of the street preacher shouting scripture passages at passers-by.  I see it in your gentleness with others.  In your choosing to take the second place.  In your decision to help others even if it means you are late about your own business.  In your commitment to help carry another’s burdens even when your own are heavy. 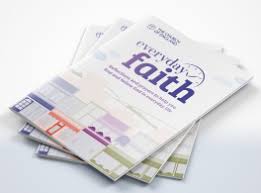 This is the ‘Everyday Faith’ carried out by those whose names are not known to be great in the church.

This is what it means, with the unnamed first disciple of Jesus, to say ‘Come and See’ not only with our words but with our lives.

This is not easy and there is little reward save that of forgetting ourselves that God’s name may be glorified.

But in so doing we will know the joy of service,
bring the knowledge of the love of God to others,
and find healing for the hurt in our own hearts.

A Co-Worker of Mother Teresa of Calcutta wrote a prayer which helps me when I am tempted to grab all the shirts for myself, refuse to walk one mile with another let alone two, and kick and scratch at those around me instead of turning the other cheek.

I hope it helps you as well;