These Reflections which take the music of Amy Grant as their theme, were originally published in Lent 2015.  They are being republished during June and July 2020 as a way of deepening our faith during the Covid19 pandemic which is affecting the whole world

(Please pray for Amy as she in convalescence after open heart surgery over Easter.)

No one, when tempted, should say, “I am being tempted by God”; for God cannot be tempted by evil and he himself tempts no one. 14 But one is tempted by one’s own desire, being lured and enticed by it; 15 then, when that desire has conceived, it gives birth to sin, and that sin, when it is fully grown, gives birth to death. 16 Do not be deceived, my beloved.  (James 1.13-16)

There’s a wealth of things that I profess I said that I believed
But deep inside, I never changed; I guess I’d been deceived
Cause a voice inside kept telling me that I’d change by and by
but the Spirit made it clear to me that kind of life’s a lie

If the musings of The Daily Mail are to believed the Church of England has finally renounced ‘The devil and all his works’.  This being, the erroneous (and some would say somewhat mischievous) conclusion they have drawn from the newly approved texts for baptism Additional Texts in Accessible Language.

The reason for tabloid concern is that the new wording for the Baptism service makes no mention at all of ‘personified evil’ be it called ‘the devil’ or any other of the names with which religious people down the ages have named a person, thing, or tendency towards evil.

Amy Grant, in the words of her song ‘I Have Decided’, would seem to agree with The Daily Mail and its need to name evil.  She owns that there is someone (some thing?) in creation which is working in the opposite direction to the God who made everything to be good.  Even though she recognises that there may be a personal ‘deceiver’ out there trying to trip us up on our path home, she also owns that it is up to us to say ‘no’ and listen to the voice of the One who Loves us Best above any other voices which may be whispering in our ears.  Be they inside of us or in the world around us or from the spiritual realm.

Today, Ash Wednesday, is the day when many people will have made the same decision that Amy does in her song.  From today until at least Easter, with God’s help, there will be no more listening to voices other than God’s song of love.  Be the voice from a ‘deceiver’ or just our own wilfulness and self-righteousness, for the next while we will attempt to stop our ears to their Siren song.

The answer to resisting temptation may perhaps be found in the oft-quoted story of an elderly Cherokee Indian teaching his grandson about which of his ‘voices inside’ he should listen to.

An old Cherokee is teaching his grandson about life. “A fight is going on inside me,” he said to the boy.

“It is a terrible fight and it is between two wolves. One is evil – he is anger, envy, sorrow, regret, greed, arrogance, self-pity, guilt, resentment, inferiority, lies, false pride, superiority, and ego.” He continued, “The other is good – he is joy, peace, love, hope, serenity, humility, kindness, benevolence, empathy, generosity, truth, compassion, and faith. The same fight is going on inside you – and inside every other person, too.”

The grandson thought about it for a minute and then asked his grandfather, “Which wolf will win?”

The old Cherokee simply replied, “The one you feed.” 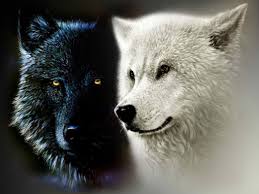 Lent, because we are often driven by what we see on the surface instead of what is inside us, has often been about what we give up, the things from which we ‘fast’.  In fact all of our Lenten disciplines have only one purpose in mind.  It is not just about giving up (though I know myself well enough to name one or two habits which I could do with leaving behind in dusts and ashes today) but about holding on.  ‘Fasting’ from the world so that we may ‘Feast’ on the Word that is Christ.

If we give out attention to ‘Him’ we will have nothing left over to give to the ‘evil’ wolf (whatever their name be) fighting within us.

So today as the journey of Lent begins make this a moment of turning away from the deceiving ‘voice inside’ and decide to listen more closely and follow more nearly the One whose voice is always a song of love.

(P.S. if readers really need help in getting to sleep the General Synod Paper ‘Additional Texts in Accessible Language’ may be a suitable soporific)

In amongst all the many good and holy things that will aid your journey through Lent seek out one thing (a habit to stop or start, an activity to give up or begin), which, with God’s help, may become for you a forever decision.

God,
Who refuses to stay in remote purity,
but comes looking for us where we fail.
Grant us the courage to see your face and,
in the light of your grace,
renounce the evil that destroys and
embrace the love that gives life to all.
Amen.                            from Pilgrim

All of the music on the video clips from YouTube is © Amy Grant.  If you enjoy listening to her songs please consider buying her recordings.  A full discography and other information about Amy can be found on her website http://www.amygrant.com

Scripture quotes are from the New Revised Standard Version Bible, copyright © 1989 the Division of Christian Education of the National Council of the Churches of Christ in the United States of America