Gospel According to Glee – 40 Days at McKinley High

[FINN tells WILL he has decided to follow his dead father’s footsteps and join the military.  WILL feels he has to tell his mum CAROL and step-dad BURT as his father’s past is not all that FINN thought it was.]

BURT:   Will, uh… told us about your plans for the future.

FINN:   Yeah, which was supposed to be private.

WILL:   Look, I-I knew telling them might upset you, but I felt obligated to bring Burt and your mom into this discussion.  This is a big decision.

FINN:  Well, you know, I was… I was going to tell you guys about it sooner or later.

BURT:   Look, Finn, you know what I want, okay?  I’m going to need somebody to take over the shop while I’m off in DC, and if I let your brother do it, okay, he’s going to have all the grease monkeys wearing white dinner jackets.

BURT:   Okay. Well, I’m glad.  Not because I’m anti-military or anything like that.  I just don’t get where you’re coming from with this.

FINN:   Well, my dad was a war hero.  I have an obligation to him to… to be a good man.  To make something of myself, to… to help people like he did.

EMMA:  You don’t have to prove to anyone that your dad is in you.  You know, everybody already knows what kind of man you are.

FINN:   Yeah, but how can you really know until you get tested?  And what better way than… than to walk in his footsteps?

CAROL:   Your dad was a good man.  He was brave and true, and… he had the same goofy sense of humour you do.  But he didn’t die in Iraq.  He served over there, but something happened to him.  I never found out what.  I don’t know if he-he did something or saw something or just lost his way, but… but he broke.

CAROL:   He died in Cincinnati after being dishonourably discharged.  Honey, he had a drug problem that he tried to get over when he came home… for… for you mostly… but… but then he… he would just… disappear for a day or a week sometimes.  One day, he just didn’t come back.  It was an overdose.

CAROL:   Because your dad was so much more than the last few months of his life.  That man he became was not your father.  Honey, I was going to tell you when I thought you were ready.

FINN:   Well, I’m not ready.  I mean, how-how… how-how did you think I could ever be ready for something like that?

‘Man in the Mirror’ sung by New Directions

In those days they shall no longer say:

‘The parents have eaten sour grapes,
and the children’s teeth are set on edge.’

30 But all shall die for their own sins; the teeth of everyone who eats sour grapes shall be set on edge.

31 The days are surely coming, says the Lord, when I will make a new covenant with the house of Israel and the house of Judah. 32 It will not be like the covenant that I made with their ancestors when I took them by the hand to bring them out of the land of Egypt – a covenant that they broke, though I was their husband, says the Lord. 33 But this is the covenant that I will make with the house of Israel after those days, says the Lord: I will put my law within them, and I will write it on their hearts; and I will be their God, and they shall be my people. 34 No longer shall they teach one another, or say to each other, ‘Know the Lord’, for they shall all know me, from the least of them to the greatest, says the Lord; for I will forgive their iniquity, and remember their sin no more.   (Jeremiah 31.29-34)

The older I get the more I look like my father.  Sometimes I am content with that, there is a kind of comfortable certainty in the idea that I have a connection with the past in my face if not the rest of my physique…  I do wonder sometimes how our children will feel when in their sixties they will look in a mirror and see their parents staring back at them.  I pray that they will smile and be able to say thank you.

We all need heroes.  Like Finn’s dad my father was in the military and spent 25 years in the Royal Navy submarine service – I am named after HMS Andrew, the boat he was serving on when I was born.  He was often away on patrol but knowing that he was ‘out there’ in the depths of the ocean keeping a watching brief over world peace (he had a few Cold War scrapes à la Hunt for Red October) made me proud.  He was not perfect, (who is?), but he was a larger than life figure whose approval I cherished and whose presence I miss.

What do we do if our ‘hero’, be it a parent or someone to whom we look up to, is found to have feet of clay?  In our era, to quote Shakespeare, the evil that men do very definitely lives after them – and rightly so!  There should be no hiding from harm caused and lives broken.  But what if the wrongdoer had people who looked to them for guidance and support?  Their (public) example and teaching may have inspired people to acts of service, or brought comfort, or even founded groups and projects that contribute to the common good.  Do we erase this from history and treat them as if they never existed in case anyone?

This is a question which has vexed human society down the centuries.  Do we have to unlearn ‘good’ lessons from ‘bad’ people?

The easy answer is ‘it depends’.  There are a wide range of options.  How ‘bad’ was the person?  Was it something kept to their family or something that touched a whole nation?  What sort of ‘bad’ was it?  Are some public sins excusable because ‘that was how things were then’, or is there a universal ethic that applies for all time?

The church, in her realisation that we are capable of immense sacrifice but also vile selfishness has always looked more to the deeds done than to the person who did them.  The principle of ex opere operato (reflected in Article 26 of the 39 Articles of Religion) reminds us that good fruit can be produced by those whose lives are not always good… and even by some who are downright evil. 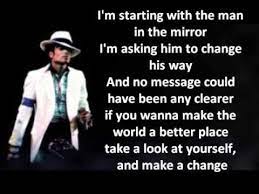 In a sense, returning to Shakespeare, the good that they did is not always ‘interred with their bones’ but in fact lives on after them in us.  This does not mean that we are blind to their misdeeds.  It does mean that to learn from our parents, our teachers, or our heroes does not mean we have to become carbon copies of them.  When I look in the mirror the man looking back at me is not my father but me.

We are not prisoners of ghosts from our past, though our past has brought us to where we stand now.  We are pioneers who accept the past for what it is, warts and all, and use it as a springboard to a future where we live in harmony with each other with God’s law of love inscribed on our hearts.  A world where no one needs to be reminded that transforming this world into the Realm of God is up to the Man in the Mirror.

May you know tender shelter and healing blessing
when you are called to stand in the place of pain.
May the places of darkness within you be surprised by light.
May you be granted the wisdom to avoid false resistance and
when suffering knocks on the door of your life,

with the hard-earned light of past turmoil,
to remind you that you have survived before,
And though the darkness is now deep,
You will soon see approaching light.
May this give you confidence and trust.
May a window of light always surprise you.
May the grace of transfiguration heal your wounds.

Prayers from ‘Prayers for Hard Times’ are copyright  © Becca Anderson 2017

Transcripts of Glee Episodes were made with thanks to gleetranscripts.tumblr.com

These Reflections, ‘ ‘Gospel According to Glee’ are copyright © Andrew Dotchin 2021 and may be reproduced without charge on condition that the source is acknowledged