With a Song in my Heart – 40 Days of Sacred Songs

26 Then an angel of the Lord said to Philip, ‘Get up and go towards the south to the road that goes down from Jerusalem to Gaza.’ (This is a wilderness road.) 27 So he got up and went. Now there was an Ethiopian eunuch, a court official of the Candace, queen of the Ethiopians, in charge of her entire treasury. He had come to Jerusalem to worship 28 and was returning home; seated in his chariot, he was reading the prophet Isaiah. 29 Then the Spirit said to Philip, ‘Go over to this chariot and join it.’ 30 So Philip ran up to it and heard him reading the prophet Isaiah. He asked, ‘Do you understand what you are reading?’ 31 He replied, ‘How can I, unless someone guides me?’ And he invited Philip to get in and sit beside him. 32 Now the passage of the scripture that he was reading was this:

‘Like a sheep he was led to the slaughter,
and like a lamb silent before its shearer,
so he does not open his mouth.
33 In his humiliation justice was denied him.
Who can describe his generation?
For his life is taken away from the earth.’ 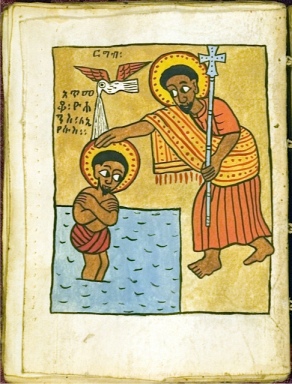 34 The eunuch asked Philip, ‘About whom, may I ask you, does the prophet say this, about himself or about someone else?’ 35 Then Philip began to speak, and starting with this scripture, he proclaimed to him the good news about Jesus. 36 As they were going along the road, they came to some water; and the eunuch said, ‘Look, here is water! What is to prevent me from being baptized?’ 38 He commanded the chariot to stop, and both of them, Philip and the eunuch, went down into the water, and Philip baptized him. 39 When they came up out of the water, the Spirit of the Lord snatched Philip away; the eunuch saw him no more, and went on his way rejoicing.

Religion and the quest for God is woven into the roots of Africa.  Western (mostly White Christians) easily forget that it was a Black man, Simon of Cyrene, who helped our Beloved carry the cross on the road to Calvary and that, through the meeting of Philip the Deacon with the Ethiopian Eunuch the Good News was preached in Africa long before it made the journey to Asia Minor and later to Europe.

In what are called the ‘Independent Churches’ in Southern Africa – which is a polite way of saying ‘not colonial’ churches – there are two strong traditions both growing out of the impact of White colonialism.  One is the Zionist Churches, whose theology and worship reminds their members that in heaven there is indeed no Jew or Greek, Slave or Free, Black or White.  Knowing this gives them strength to endure present sufferings (notably under Apartheid) and look forward to Zion.

The other branch of indigenous Christianity in Southern Africa is the ‘Ethiopian Church’.  This has nothing to do with the cult of Haile Selassie but instead claims Christianity as an African faith.  For many decades the Order of Ethiopia was part of the Anglican Church in Southern Africa until in 1999 there was an amicable parting of the ways which encouraged and allowed each to prosper in whichever part of the vineyard God called them to work in. 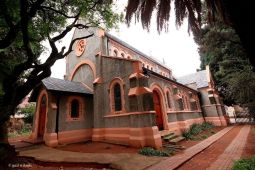 I remain immensely grateful for the gift of worship in many local languages when I was a priest in Southern Africa – although announcing the hymn number from six or seven different hymns took a little while!  It was like Pentecost happening in church every Sunday.  We were blessed to live in the optimistically named suburb of Belgravia in the East of Johannesburg at a time when the petty rules of Apartheid had started to fracture.  No one commented if Black and White Christians worshipped together – the brave congregation of St George’s Cathedral in Cape Town had won that battle for everyone.  We got used to the idea that Sunday morning worship needed over two 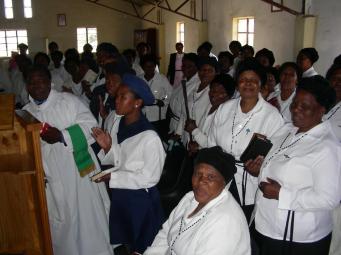 hours instead of just inside of sixty minutes.  We rejoiced that occasionally AwoManyano (Mothers’ Union) wanted to spend all night in the church hall, stomping their heels, clapping their hands, preaching and singing hymns in an imvuselelo (revival) until dawn.

It was long, it could be tiring, but it was oh so very glorious.  Heaven was brought down to earth and we knew that we, Zionist, Ethiopian or bog standard CofE, were all travelling to the same place, ‘phezulu’.

Father of lights,
raise us with Christ to your eternal city,
that, with kings and nations,
we may wait in the midst of your temple
and see your glory for ever and ever.

1)  Sing a hymn in a language not your own.  (P.S. if you don’t have many modern languages to hand there are some lovely Taizé chants in Latin)

2)  Spend a little extra time in church worshipping this Sunday.  Arrive early or leave late do whatever is easiest but aim not to leave God’s presence until you are assured that God is always present and will go with you into the week ahead.

In Southern African Christianity there is a deeper, older, understanding of God who is over all watching and protecting everyone.  The Zulu use the word Nkulunkulu (the great one), the BaSotho call God Molimo (the Peaceful), and the Xhosa use the word Tixo (of the People)[1].  All people regardless of tribe recognise God as The One who brings everyone to sit in peace under the same Baobab tree.  Ntsikana was a Xhosa Christian prophet who put this into song…

If you liked that, you will love this.  One of South Africa’s most famous exiles in the world of music was Dollar Brand (another was Hugh Masekela who was a pupil at St Peter’s School, Rosettenvile Johannesburg – now St Martin’s School where I was chaplain).  In this recording Brand moves from his jazz routine to explore the depths of the roots of his faith found in the soil of Africa – Mayibuye iAfrika.

These reflections are also published on my blog: suffolkvicarhomes.com on Twitter as @SuffolkVicar, and on my public Facebook page Rev Andrew Dotchin . If you would like them as a daily email please send a request to vicar@felixparish.com

Prayers are adapted from the Psalm Prayers in the Common Worship Psalter. material from which is included here, is copyright © The Archbishops’ Council 2005
Scripture quotations are copyright © New Revised Standard Version Bible: Anglicized Edition, copyright 1989, 1995, Division of Christian Education of the National Council of the Churches of Christ in the United States of America. Used by permission. All rights reserved.
These Reflections, ‘With a Song in my Heart’ are copyright © Andrew Dotchin 2022

[1] Translation into English struggles when it comes to ‘Tixo’.  Some say it is an invented word others that it has deeper roots.  All though see ‘Tixo’ as a perfect example of uBuntu and so perhaps a mirror of the incarnation.