Address for the Suffolk Vigil Against Hate Crime

When Debbie asked me to give this address, being a Church of England vicar giving an address at the Cathedral for the first time, I asked ‘What shall I wear?’ As anyone who attends Cathedral services or events frequently knows it is very important that you wear the right clothes, which are of the right colour, for the right occasion.

Well Debbie is a Salvationist and I have very poor dress sense (or any sense at all for that matter!) and we were a little flummoxed as to what to do. Then I had an idea about using every colour I could find and help the colours tell a story of how Hate Crime has touched me and how we might find hope in the middle of the hate.

The first colours I’ve chosen are from the flag of the country many have come to know as the Rainbow nation. 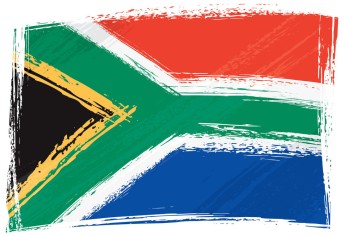 I want to tell you the story of a friend of mine, whom I will call ‘Meisie’. She like Meghan Duchess of Sussex was of mixed race ancestry – and isn’t it wonderful to hear the news today that a child with honey-coloured skin is expected to be born into the House of Windsor in the spring?

Meisie’s skin tone was very pale and she was able, to use a phrase still common today to ‘pass for White’. This meant she had a different circle of friends then her family had and, as fate would have it, she fell in love with a White man from an Afrikaans family. Let me call him ‘Johann’.

There love was a deep and true love and they chose to get married. Something that was then illegal for a mixed race couple to do.

But Meisie had not told Johann that she was a ‘Coloured’ – the term South Africans used for anyone who didn’t fit into a tribal or White box.

They were married in church surrounded by his family. Meisie told Johann that she was an orphan, though she had sisters and brothers and a mother and father still alive. She cut them out of her life because of her deep love for Johann. 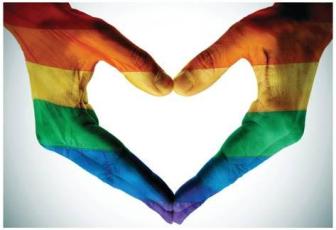 Whenever I move to a different church one of the first things I do is to visit the churchyard to see who in the church community is recently bereaved and try to make contact with them.

There is certain etiquette about the inscription on gravestones so it struck me to see an unusual wording on one of the ones in the churchyard at St John’s.

Such bald bare words that gripped my heart and made me stop in my tracks.

Next year will be the 20th anniversary of the bombing of the Admiral Duncan pub in Soho. It was there that Nik, and his friends John Light and Andrea Dykes with her unborn child, had their lives taken by a pipe bomb containing 1500 nails. A further 70 people were injured in the blast causing wounds so severe that one doctor described as worse than any caused in similar bombings by the IRA.

The rainbow flag flies at St John’s Church for Nik and for all others whom society (and sometimes, to my shame, even the Church excludes) as a reminder that we are a place that is ‘Open to God, Open to All’

The final colours I want to wear tonight are the pink and pastel blue of the Transgender flag. Though it means most for those who are on a journey to becoming who they are, for me it also supports all those for whom society has no place to fit.

I have two stories to tell:

One is of my dear friend Matthew Percy. 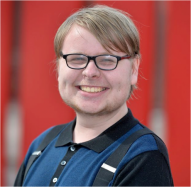 Matthew was a brave young man who refused to have his voice silenced. Who always spoke up for those who found speaking difficult. Who, even though he himself was one of their number, was an advocate for those who were on the autistic spectrum. Who worked hard for others in local politics and in the National Youth Parliament. Who was worn-down by all the opposition he met. Who stepped into the path of a train on 21 April 2015!

The other is of my 18-year-old cousin Jayden. 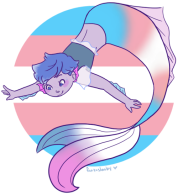 Jayden, discovering his identity in his early teenage years, was bullied at school. He moved to a more welcoming school and grew to be a promising artist. A loving child by nature he tried to fit in where he could. He was over-the-moon excited when his mum said it would be ok for him to attend his new school prom in a charity shop suit instead of the frilly prom dress she had set her heart on. Jayden was looking forward to the future, having just won a scholarship to Oxford. Early one morning just a few weeks ago, everything became too much for him, and he walked into the path of a train.  His funeral is on a Friday a few weeks hence.

For Matthew and for Jayden, the phrase ‘Careless Talk Costs Lives’ is chillingly true.

How are we to cope?
Where can we find healing for our hate?

Archbishop Desmond Tutu, who had more than his fare share of hate crime, had this to say. 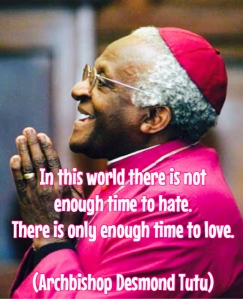 ‘In this world there is not enough

There is only enough

And so I want to close by going back to my first colours.

This flag, South Africans call it ‘Die seskleur’ (the six colours), is not the flag under which Meisie and Johann’s four babies were stillborn.

This is the flag of the New South Africa; a nation founded on equality not apartheid, hope not hate.

So tonight as I light candles for Meisie and Johann and their babies
For Nik, John, Andrea and her baby, for Matthew and Jayden.
I will do so with tears in my eyes but hope in my heart.
I will do this because, as Desmond Tutu prayed;

One thought on “Healing Hate with Hope”