Setting the Scene:   Digory has promised Aslan that he will fetch a magical apple from a walled garden in the North of Narnia. Here he comes face to face with the Witch Queen Jadis who has tasted the apples herself and is trying to persuade Digory to break his promise.

‘Oh shut up,’ said the miserable Digory, still in the same voice. ‘Do you think I don’t see? But I – I promised.’

‘Ah, but you didn’t know what you were promising. And no one here can prevent you.’

‘Mother herself,’ said Digory, getting the words out with difficulty, ‘wouldn’t like it – awfully strict about keeping promises – and not stealing – and all that sort of thing. She’d tell me not to do it – quick as anything – if she was here.’

‘But she need never know,’ said the Witch, speaking more sweetly than you would have thought anyone with so fierce a face could speak. ‘You wouldn’t tell her how you’d got the apple. Your Father need never know. No one in your world need know anything about this whole story. You needn’t take the little girl back with you, you know.’

That was where the Witch made her fatal mistake

‘Look here; where do you come into all this? Why are you so precious fond of my Mother all of a sudden? What’s it got to do with you? What’s your game?’ 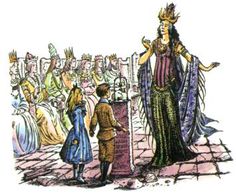 ‘Good for you, Digs,’ whispered Polly in his ear. ‘Quick! Get away now.’ She hadn’t dared to say anything all through the argument because, you see, it wasn’t her Mother who was dying.

‘Up then,’ said Digory, heaving her on to Fledge’s back and then scrambling up as quickly as he could. The horse spread its wings.

‘Go then, Fools,’ called the Witch. ‘Think of me, Boy, when you lie old and weak and dying, and remember how you threw away the chance of endless youth! It won’t be offered you again.’

… The children dismounted. Digory saw all the animals, dwarfs, satyrs, nymphs, and other things drawing back to the left and right to make way for him. He walked up to Aslan, handed him the apple and said: ‘I’ve brought you the apple you wanted, sir.’

Some of the people the children meet in Narnia are champions like Prince Caspian or stalwarts like Puddleglum. But not all are friendly. The court is still out as to whose side the dwarfs are on (beside their own that is) but some of the people they meet are decidedly nasty pieces of work. Amongst these are Shift the Ape whom we will meet in a few days, and Jadis of Charn who comes to be the White Witch of the North.

Jadis is consumed by power and was happier to see her own world destroyed than sue for peace. She refuses to learn from her mistakes and rides rough shod over anyone who stands in her way, using everyone else as tools to achieve her selfish aims. As she does later with Edmund in ‘The Lion, the Witch and the Wardrobe’ so now she tries to persuade Digory to join her side so that she may have a ‘consort’ to do her bidding.

Sadly our world has many people who are kindred spirits of Jadis of Charn. Consumed by the lust for power they tread on everything in their path and care nothing at all for the debris they leave behind. Look at the front page of any newspaper (especially the tabloids) and you will see stories of those who think their life is more important than the lives of others. Their hubris knows no bounds and they see power, personal wealth, and the subservience of others as their birthright.

How do we cope with their siren voices in our ears? The whisperings of the promise of personal power and selfish fulfilment, which drip like honey from their mouths and are visible in the trappings of their lives, are very very attractive. One thing we can do and (unless God has put us in a special place and given us extra grace to stand against such as these) the one thing we must do, is flee.

This is Digory’s choice, but it is not a running away from Jadis but rather a coming home to Aslan. In the middle of the offer of everything that, in the words of the Bible seems to be ‘good for food, and a delight to the eyes,’ (Genesis 3.6) Digory says ‘No’ and remembers the task of Aslan and the love of his mother who taught him to keep his promises. Of course Jadis does not help her own case by presuming that Digory lives by the same standards as she does and so suggests that he may want to leave Polly behind.

So they flee and are taunted by Jadis as Fledge lifts them into the air;

‘Go then, Fools,’ called the Witch. ‘Think of me, Boy, when you lie old and weak and dying, and remember how you threw away the chance of endless youth! It won’t be offered you again,

Jadis does not know the end of the story. She does not now that the Lord Digory and Lady Polly will return to Aslan’s land at the end of the Chronicles. She cannot imagine that in her moment of ‘triumph’ over the lion she will meet her own doom. She has no idea that for those who follow the ways of God the ‘chance of endless youth’ is indeed freely offered to all who want to walk in His ways.

When we meet evil, when we meet all-consuming power and pride, when we find our hearts being torn between the desire to do something which seems harmless and acts of righteousness, we need to learn to listen to the voices which are calling us. Is it the siren voice of personal power and pleasure or the gentle whisper of the One who loves us Best? Follow Him first and everything else will find its place.

O God, who am I now?
Once, I was secure
in familiar territory
In my sense of belonging,
unquestioning of
the norms of my culture
the assumptions built into my language
the values shared by my society
But now you have called me out and away from home,
and I do not know where you are leading.
I am empty, unsure, uncomfortable.
I have only a beckoning star to follow.
Journeying God, pitch your tent with mine
so that I may not become deterred
by hardship, strangeness, doubt.
Show me the movement I must make
toward a wealth not dependent on possessions
toward a wisdom not based on books
toward a strength not bolstered by might
toward a God not confined to heaven
but scandalously earthed, poor, unrecognised….
Help me to find myself
as I walk in other’s shoes.

in ‘The Book of a Thousand Prayers’ © Angela Ashwin – Compiler

Pope Paul VI said ‘If you want peace struggle for justice’. Pray for someone who campaigns for righteousness in any sphere of human life; care of the environment, children, animals, trafficked women – the causes are far too numerous. Consider becoming a supporter of an organisation that protests against unbridled selfish power in one of these areas.

Today say ‘no’ to a temptation – your normal Lenten discipline should not be included in this.

Devise an ‘escape plan’ to bring you home to God quickly. Choose a prayer phrase which you can memorise and use each time you feel tempted to exercise selfish power.

My favourite is these words of Bishop Duncan Buchanan:

’Lord today make me humble, and if you can’t humiliate me.’