Jesus is my Homeboy

Then he began to say to them, ‘Today this scripture has been fulfilled in your hearing.’  22 All spoke well of him and were amazed at the gracious words that came from his mouth. They said, ‘Is not this Joseph’s son?’

Due to the vagaries of the Church Calendar and the varying date of Easter, we won’t get to read what happens next in the synagogue at Nazareth this year, (perhaps something to read after Sunday lunch?) but to give you a teaser I have extended the gospel reading by one verse.

We should have ended at, ‘Then he began to say to them, ‘Today this scripture has been fulfilled in your hearing.’  Which itself suggests Jesus has not quite finished speaking. The next verse reads, ‘All spoke well of him and were amazed at the gracious words that came from his mouth. They said, ‘Is not this Joseph’s son?’

What I would like to draw our attention to is the word ‘amazed’. What were the men in the synagogue ‘amazed’ at?

The words Jesus spoke?
That it was Jesus who spoke them?
Or what Jesus said about the words? 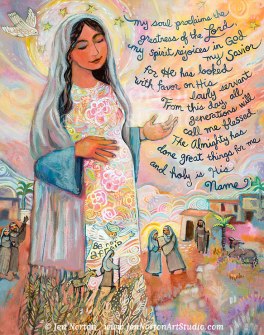 We need to discover the source of this amazement as it lead to a fairly violent response further on in the chapter… but that is for reading later today.

Were these amazing words? World changing words that would turn society upside down, yes, but not new words. These were old words. Words from the distant past of Isaiah. Words (mouthed by the barren Hannah) and echoed by Jesus’ mother in The Magnificat. Words full of hope and of God breaking in on society. These words could be amazing but, to listeners over-used to hearing the promise of the dawn of God’s Reign, they were not amazed by them on this Saturday in Nazareth.

Was this an amazing speaker? Well what’s not to like when the local boy comes good? 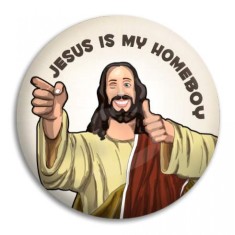 Which of his listeners, at the beginning at least, would not want to say to people elsewhere ‘Jesus is my homeboy’? It feels good to come home and be involved in a ‘show and tell’ to your uncles and brothers and neighbours and your teachers what you have learnt in the wide world.

And there’s more to it than simply that, Jesus was the carpenter’s kid, and in those days you only became a carpenter if somehow you had lost your family farmland and had to scrape a living out of other people’s ignorance, idleness or generosity. Like the shepherds that Luke tells us about at the manger, carpenters and other trades were the lowest of the low and amongst the poorest of the poor. 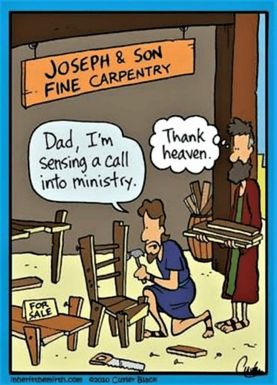 Maybe they came along to have a laugh but were amazed by his eloquence? But this is not what amazed them. After all he had a track record of preaching, and being praised for his words, in Synagogues up and down The Galilee.

So perhaps what amazed his listeners was my final suggestion.

It was not the words Jesus spoke
that got them excited.
It was not that it was Jesus speaking
that made them sit up and listen.
It was what Jesus said about the words
he spoke.

‘Today this scripture has been fulfilled in your hearing.’ This proclamation should have been welcomed with exultant joy but instead caused amazement and later rejection.

good news to the poor?
release to the captives?
recovery of sight to the blind?
letting the oppressed go free?
proclaim the year of the Lord’s favour.?

But, as you will discover when you read the rest of Luke Chapter 4 (no peaking during the sermon please!) it definitely was not liked, and Jesus was no longer welcomed in his home town.

For centuries the children of Israel had longed for ‘the year of the Lord’s favour’, the year of Jubilee when everyone would find themselves as they first where when they entered the Land of Promise. Each family having an equal share and part of a nation built on the knowledge that the land belonged to God and was meant for the common good.

The Promised Land that Isaiah spoke of was meant to be a heaven on earth.

6 The wolf shall live with the lamb, 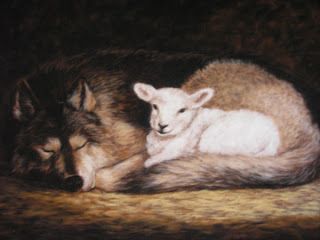 the leopard shall lie down
with the kid,
the calf and the lion
and the fatling together,
and a little child shall lead them.
7 The cow and the bear
shall graze,
their young shall
lie down together;
and the lion shall eat straw
like the ox.
8 The nursing child shall play over the hole of the asp,
and the weaned child shall put its hand on the adder’s den.
9 They will not hurt or destroy
on all my holy mountain;
for the earth will be full of the knowledge of the Lord
as the waters cover the sea.     (Isaiah 11v6-9)

I have a suspicion that the amazement is that Jesus is not proclaiming some pie-in-the-sky-when-you-die paradise but is his calling them to a radical new way of living now. He is not so much preaching a sermon as proclaiming the manifesto of a Palestinian version of the Socialist Workers Party!

What the people wanted to hear was the ‘old old story’ of God’s loving kindness towards them… and only them! They did not expect someone to come along and tell them, ‘It’s time to get off of your hams and get on and do something for people other than yourself’. This is not easy as ‘good news for the poor’ often means poor returns for the wealthy, and ‘setting captives free’ means everyday people putting themselves in harms way.

Let me tell you a small story of our own to illustrate. We have a friend in Ipswich called Paul. Paul is, what we Franciscans call a ‘wayfarer’. He used to arrive at the rectory in our previous parish every fortnight or so and ask for money to buy airtime for his phone, which neither Lesley-Anne ever saw him use! One Sunday I saw him coming along the pavement through the study window and quickly drew the blind so that he couldn’t see I was at home and left Lesley-Anne (who is far more saintly than I am) to answer his ring at the door, which was loud and frequent. After about five minutes and some chat backwards and forwards I heard the door close I crept out of the study to ask Lesley-Anne if Paul had left and how much he had cost our exchequer this time. Only to find that Paul was sitting at our dining room table, eating my Sunday Lunch and at the same time complaining about how overpaid vicars were! Humble pie was my meat and drinks that day as I heard again the words of Jesus about ‘good news to the poor’.

You see Jesus’s words are only ever ‘fulfilled in our hearing’ if we follow them up with action.

We are called not so much to preach the good news to the poor, the captives, the blind and the oppressed but ‘be’ good news for them! What is the strapline that Christian Aid uses to encourage us to be Christians who are active in the world? ‘We believe in life before death’, and so they call the church to be people who put deeds before words and practice before preaching.

These are amazing words because they answer the questions about oppression and world poverty that non-believers so often ask of the faithful. You know that person who says ‘if there is a God why is there hunger and torture and wars and disease’?

But the answer is not one we always want to hear. We are the answer to the world’s ills and are not only called to proclaim but enable good news for the poor, release for captives, recovery of sight to the blind and freedom for the oppressed.

Theresa of Avila in one of her prayers reminds us 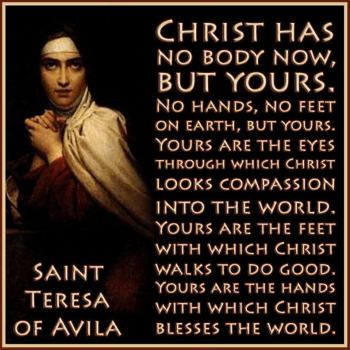 Or as my favourite Nonnatnun, Sister Monica Joan, says;

And when the church finally learns to put that into practice then the year of the Lord’s favour will be proclaimed and the whole world will be amazed by the love of our generous God.